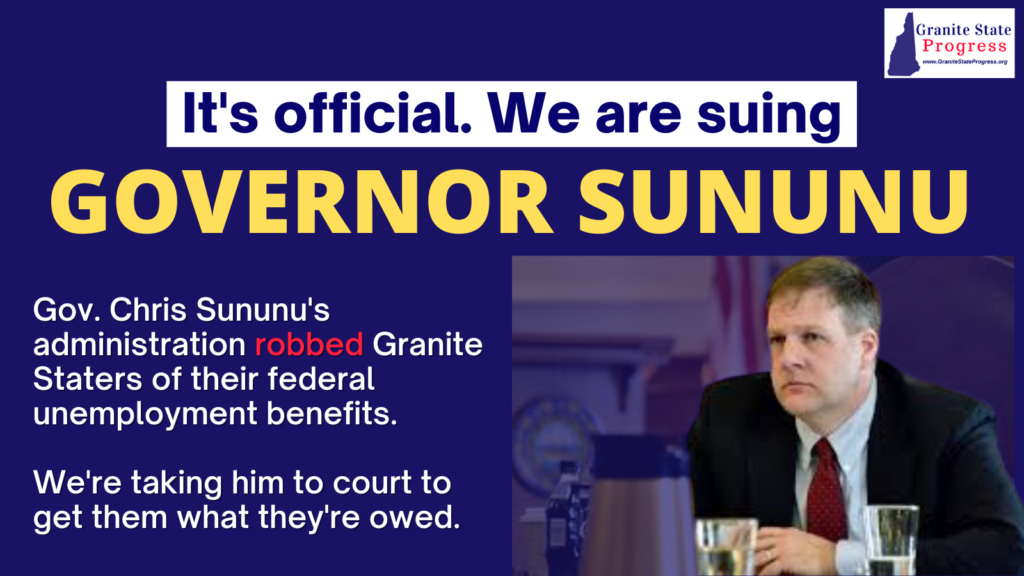 CONCORD, NH – In case you missed it, a new lawsuit was filed in the Hillsborough County South Superior Court last week against Governor Chris Sununu’s Administration for prematurely cutting off federal unemployment benefits available to Granite Staters under the CARES Act. The suit is filed on behalf of four plaintiffs seeking a declaratory ruling and injunctive relief to reinstate the benefits, which could return thousands of dollars to Granite State families facing the loss of a job or income due to the COVID-19 public health pandemic. A court date is set for Friday, September 3rd.

NH Bulletin: New Hampshire sued for early end to federal unemployment benefits. “New Hampshire is now one of 15 states that have been sued for ending federal unemployment benefits before they expire Sept. 6. Similar lawsuits have seen some success in at least three states, failed in several, and are pending in the rest. The lawsuit filed in Hillsborough County Superior Court on behalf of four people who received federal pandemic benefits alleges the state Department of Employment Security did not have the discretion to end the federal benefits. The court has scheduled a hearing for Sept. 3.”

NHPR: Granite Staters File Lawsuit To Reinstate Some Pandemic Unemployment Benefits. “Michael Perez of Perez Law represents four plaintiffs in the case. He says the suit focuses on the PUA program because unlike other pandemic programs, the state should not be able to opt out, based on language in the CARES Act. He says while a provision exists for states to terminate other programs, such a provision does not exist for PUA. Additionally, Perez argues, two other sections in the law make the program mandatory. Perez also says language already in New Hampshire law obligates the state to distribute a program like PUA. He says courts in a few other states with similar statutes, like Arkansas and Ohio, have ruled benefits must be reinstated in similar challenges.”

New Hampshire Union Leader: Sununu sued over early end to extra unemployment. “Lawyers for those suing said they were optimistic about their chances because judges in four states have overturned these decisions in states with Republican governors to bring an early end to the extra, $300-per-week benefits for all on the unemployment rolls. New Hampshire was the only state in the Northeast to end these benefits early. The cancellation of this program threw 15,000 off the rolls, according to the lawsuit.”

Public News Service: Groups Urge NH Agency to Pay Out Pandemic Unemployment Assistance. “The unemployed are being villainized,” McKay contended. “They’re being told you’re lazy, you get a job. And I can assure you that the people that were relying on unemployment actually need it. They’re struggling to keep up with just day-to-day expenses and looking for work and not finding it.” While New Hampshire was among the states that cut off benefits early in an effort to get people back into the workforce, studies so far have shown no increase in employment.”

Laconia Daily Sun: New Hampshire sued over federal jobless benefits. “PUA was created to provide jobless benefits to “gig economy” workers and others who didn’t qualify for regular state unemployment benefits. It is one of several other federal unemployment programs that are set to expire on Sept. 6, absent congressional action. The lawsuit notes that the U.S. Department of Labor is allowing states to reinstate participation in PUA and other programs even as it expires, “including back benefits to eligible claimants.” Lawsuits filed in several states, including Arkansas and Oklahoma, have successfully forced officials to provide PUA back pay to those who are eligible for the benefits but were cut off.”

New Hampshire Union Leader: New Hampshire sued for ending COVID-19-related jobless benefits. “The lawsuit takes direct aim at eliminating this program, designed for workers who don’t normally qualify for federal jobless benefits …“What’s unique about this program, unlike the other types, is that PUA is a mandatory program. Neither state nor federal law gives N.H. Employment Security the authority to abandon PUA before it expires,” said Mike Perez, the lawyer representing these residents. “The law says that the state shall participate.”

Eagle Tribune: Unemployment benefits lawsuit. “Four New Hampshire residents filed a lawsuit Friday challenging a decision by Gov. Chris Sununu’s administration to end unemployment benefits under the federal CARES Act nearly three months earlier than they were scheduled to run out on Sept. 6. The lawsuit filed in the Hillsborough Superior Court in Nashua against the state of New Hampshire and New Hampshire Employment Security and its commissioner asks a judge to reinstate the benefits dating back to June 19, when they were ended. Similar lawsuits have been filed in other states where the benefits were ended early.”

Hippo News: PUA Lawsuit. “Pandemic Unemployment Assistance was created to help people with careers and businesses that were interrupted because of the pandemic, and who otherwise would not be eligible for the typical unemployment benefits,” Perez said in the release. “Neither state nor federal law gives New Hampshire Employment Security the authority to abandon PUA before it expires … We did ask New Hampshire Employment Security to reinstate PUA before filing suit, but we have not heard back from them in response to that request.”

Conway Daily Sun: New Hampshire sued over federal jobless benefits. “One of the plaintiffs, Cassandra Caron, lost her job as a cosmetologist during the pandemic and began receiving PUA benefits to cover rent, food, utility bills and other basic expenses. But when the state ended its participation in PUA on June 19, the single mother said she has been unable to find another “suitable job” or provide for her family, the lawsuit alleges. “With dwindling savings and no income, Cassandra made a difficult choice to apply for disability benefits based on her traumatic brain injury, PTSD, and Type II narcolepsy,” the complaint reads. “The early termination of PUA benefits actually helped remove Cassandra from the workforce.” Another plaintiff, Aaron Shelton, is a self-employed social media marketer whose work up dried during the pandemic, forcing him to seek federal unemployment benefits. PUA covered his basic living expenses – such as car payments, food, utilities and rent – but when those benefits were cut off in June, he had to tap into his savings to stay afloat. Now he’s running out of money, according to the lawsuit … The lawsuit notes that the U.S. Department of Labor is allowing states to reinstate participation in PUA and other programs even as it expires, “including back benefits to eligible claimants.” Lawsuits filed in several states, including Arkansas and Oklahoma, have successfully forced officials to provide PUA back pay to those who are eligible for the benefits but were cut off.”

Boston Globe: LAWSUIT-UNEMPLOYMENT BENEFITS. “New Hampshire was among the first to expand eligibility for unemployment benefits when the pandemic first struck. Thousands of people were collecting unemployment benefits, including $300 per week supplemental payments either from the state or a federal program created during the pandemic. The state decided to end the extra payments June 19 because the unemployment rate had dropped and given the abundance of available jobs, Sununu had said. Mike Perez, an attorney representing the four residents, said neither state nor federal law gives New Hampshire Employment Security the authority to abandon a program known as Pandemic Unemployment Assistance before it expires. George Copadis, the employment security director, deferred to the state attorney general’s office to comment. Messages seeking comment were left with that office and with a spokesperson for Sununu.”

CBS Boston: Did Cutting Unemployment Benefits In New Hampshire Ease The Worker Shortage? “In New Hampshire, the benefits ended in June, but that hasn’t had much of an impact on the need for workers. Stephanie McKay runs a Facebook group for people looking for jobs in New Hampshire. There are 4,500 members. “We have a lot of single parents who can’t work in the service industry,” McKay told WBZ-TV. Even though there are jobs available in the service industry, not everyone can take one of those because of child care and health issues.”

The initial press release reviewing the case can be found here.

A copy of the full legal petition and plaintiff stories can be found here.