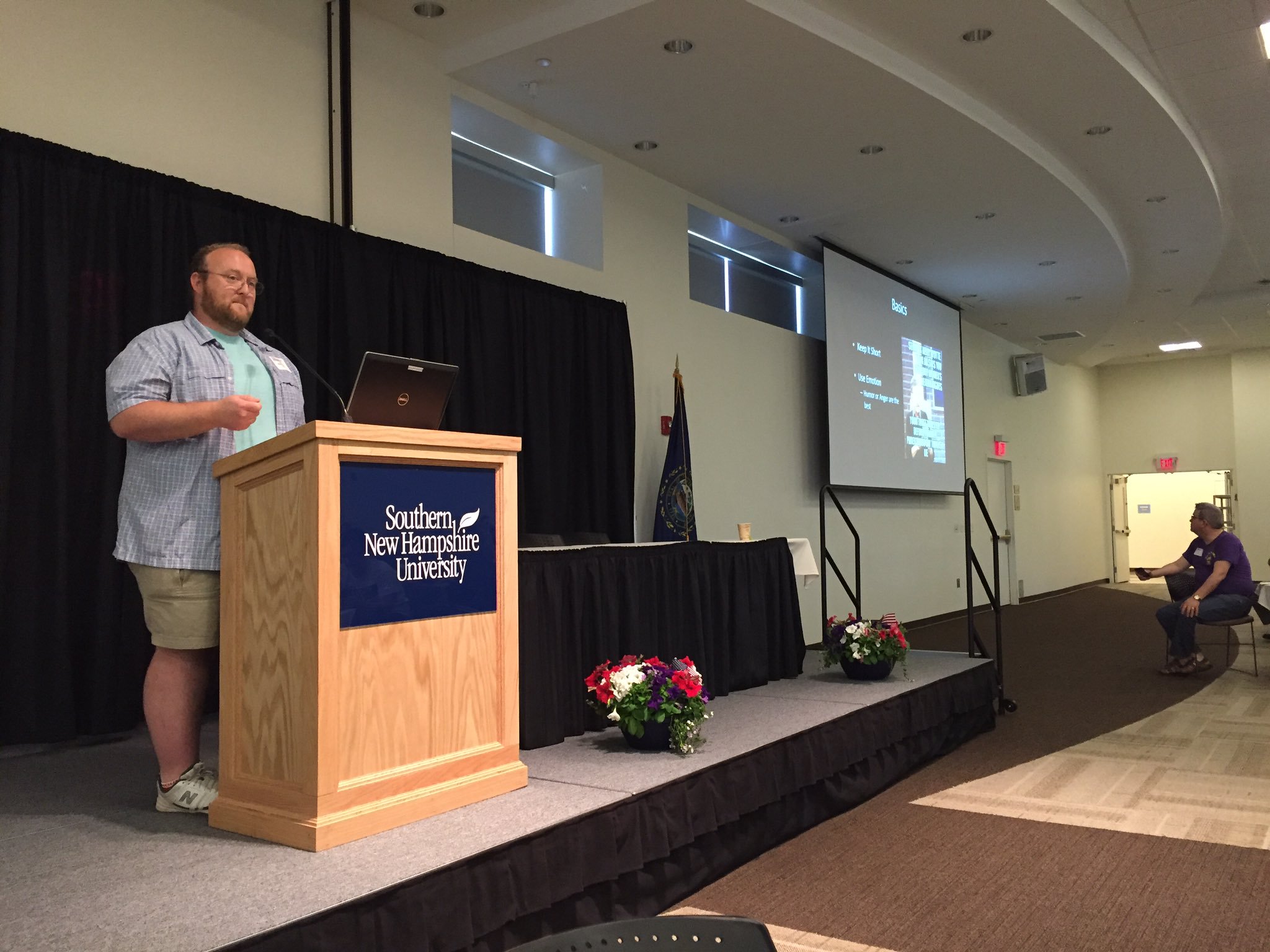 You know what you stand for, but are you ready to effectively communicate that message to your neighbors, elected officials, constituents, or the media? Learn how to craft and frame your message for use with various audiences. Communications trainings are tailored to the specific needs of each requesting group; sample tracks include: crafting your message, putting together the nuts and bolts of a communications plan, working with the media, testifying at the State House, and preparing for an interview. Communications trainings are a great way to engage your board, staff, or members in campaign efforts.

What’s happening at the State House this year? Join Granite State Progress for an overview of major bills of interest and the key players, followed by a discussion on opportunities for advocacy and accountability. This overview includes actions taken by the Governor, Executive Council, Senate, and House, and select Commissioners. This presentation can be given at any point during the session, or on a recurring basis for regular groups meetings.

ALEC Exposed NH – How Corporations Are Writing Our State Laws

The American Legislative Exchange Council, otherwise known as ALEC, allows corporate lobbyists to write legislation behind closed doors that is then introduced in State Houses across the country. This model legislation is not drafted in response to any local interests or community concern, instead it is intended solely to benefit the bottom line of special corporation interests – often at the expense of everyday Granite Staters. The influence of ALEC corporate special interests in the New Hampshire State House is shocking. Come learn about the ALEC model legislation in New Hampshire, its intent and supporters, and how you can help expose the corporations writing our laws.

The Free State Project’s stated purpose is to move to New Hampshire, take over state government, and create a libertarian ideal of utopia. Over 20,000 libertarians signed a letter of intent to move, with thousands of early movers already in-state. Granite State Progress and a working group of community members have tracked the influence and structure of the Free State Project over the years, from their attempts to slash public services to their vast social network that helps identify housing, jobs, and political opportunities for movers. Come learn what it is about, how they operate, and what you can do to protect your community from their extreme tactics and ideology.

The growing threat of domestic terrorism came into glaring reality during the attack on the US Capitol Building. Armed militias, white supremacists, and other extremist groups from across the nation played a significant role in carrying out the violence. In New Hampshire, there has been a marked increase in white nationalism, violent rhetoric, and extremist activity in the past year, only further fueling the groups that were already active. And far too often, Republican leaders have not only failed to call these groups out — they have instead worked to curry their favor in order to advance their own pet political projects. Granite State Progress has been tracking extremist groups and individuals in New Hampshire for most of the last decade, and is on the (zoom) road with a new presentation “The Growing Threat: Militias & Extremists in New Hampshire.” Already, hundreds of Granite Staters have participated in the discussion, gaining insight and expertise on these movements, the politicians and systems enabling them, and what we must do to stop them from gaining a stronger foothold in New Hampshire.

Digital and Social Media for the Reluctant User (Level 101)

Digital and social media are major sources of information and communication used effectively by progressives everywhere.  This roundtable discussion provides an open forum for reluctant users and those who don’t know much about using social media to discuss their concerns and get some of their questions answered.  If you are not using social media in your organization or in your personal political advocacy, or are leery of using it for whatever reason, this workshop is a must-attend for you.  We’ll discuss some of the concerns along with some strategies for beginners who might want to start using social media.  This will be an informal conversation about the benefits of using social media, not necessarily a tutorial on how to use it.   There will be resources for your reference and contacts to help you make forward progress in the digital age.

Do you use social media but want to take it to the next level? Join Granite State Progress and one of New Hampshire’s premier progressive bloggers, Matt Murray of NH Labor News, as we teach you how to optimize your website, Facebook page, Twitter account, Tumblr, and more to reach a larger audience and drive a progressive narrative. This workshop includes real-life examples of how NH social media users have repeatedly created national news stories to highlight progressive wins and expose right-wing rhetoric, and how you can do the same. Everything from how to create popular images to pushing a specific meme will be covered, with audience questions in between.

Workshops, presentations, and speakers vary in length from 30 minutes to 2 hours. Contact us for more information and to schedule a workshop near you!

Join Granite State Progress for a research briefing on the issue statements and vote records of our Governor, Executive Councilor, State Senator, and State Representatives on major issues facing our state, then learn about district-specific accountability tools to help local groups hold politicians’ feet to the fire. Following the presentation, we will discuss how to increase public awareness and civic participation to make sure elected officials are voting in the best interest of their constituents. This is a hands-on strategy session intended for action-oriented groups and requires certain commitments from the host organization and/or community member(s). Apply now for an accountability meeting and district-specific accountability tools.

Given New Hampshire traditions of participatory democracy and the special role of the nation’s first Presidential Primary election, New Hampshire voters have an unusual opportunity to interact directly with people who seek

public office on the local, state and federal level. With good preparation, we can use those interactions not only to find out where candidates stand on crucial issues but also to drive the political discourse in the direction of more justice, more peace, and more democracy. “Birddogging” is a term that describes techniques to get public officials or candidates to address issues out in the open, for all to see and hear. This workshop shows participants how birddogging works and how to do it so that you feel more comfortable when practicing this tool (less anxiety, trepidation, or fear).  Come and hone your birddogging skills while learning about local campaigns that will utilize the tactic over the coming year. In New Hampshire an election is always just around the corner; it’s time to get ready! Contact AFSC-New Hampshire or Open Democracy to inquire about scheduling a workshop.

Granite State Organizing Project conducts Active Bystander Trainings in English and Spanish. A bystander is a witness—someone who sees a harmful situation and has a choice to make: Do I do something?  If so, what do I do?  Active Bystander Trainings teach people to recognize and analyze bystander situations, and to act if appropriate. Learn more about the training, including a calendar of upcoming ones, here.