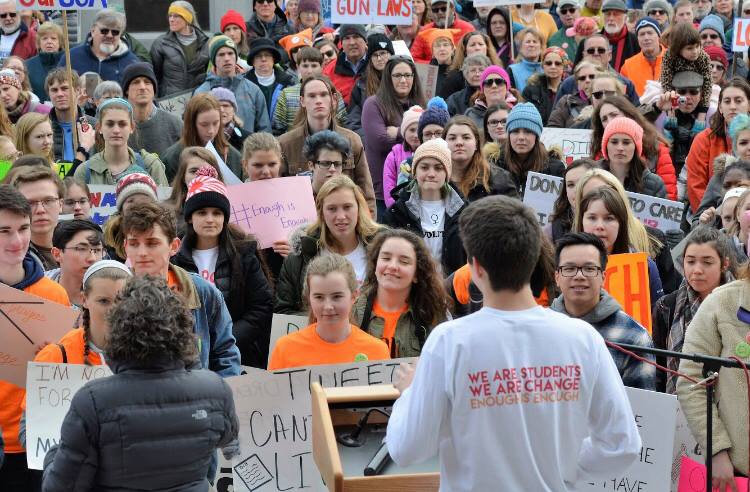 Granite State Progress supports gun violence prevention, including opportunities to strengthen state and federal laws such as closing the background checks loophole and advocating for policies that protect our children and our communities. Since 2009, Granite State Progress has monitored firearms related policy at the state level, working with other state-based and national groups and advocates to advance public safety laws and defeat dangerous gun lobby sponsored legislation.

Below are 2021 bills dealing with firearms in the New Hampshire State Senate and State House. Our tracking sheet does not mean support or opposition to these bills unless otherwise noted. If you have any questions related to these bills, email info@granitestateprogress.org.

SB 154 prevents the State of New Hampshire, a political division of the state or any person acting under the color of state, county, or municipal law from “using any personnel or financial resources to enforce, administer, or cooperate with any law, act, rule, order, or regulation of the United States Government or Executive Order of the President of the United States that is inconsistent with any law of this state regarding the regulation of firearms, ammunition, magazines or the ammunition feeding devices, firearm components, firearms supplies, or knives. Silence in the New Hampshire Revised Statutes Annotated pertaining to a matter regulated by federal law shall be construed as an inconsistency for the purposes of this chapter.” Short take: the Biden-Harris Administration and Congressional leaders are working urgently to save lives while state politicians continue to hold New Hampshire back. SB 154 is unconstitutional, could cause New Hampshire to lose hundreds of thousands of dollars in federal grants and aid, and is designed to block, stop, or delay common sense gun violence prevention efforts. It could also prevent New Hampshire from working with the DOJ, FBI, or ATF on major cases, including investigation the violent insurrection at the capitol or the growing armed militia and white supremacist activity in the Granite State. We need to close background check loopholes, stop the proliferation of ghost guns and assault style weapons on our streets, and develop a real plan to address the public health pandemic that is gun violence. SB 154 would be worse than the status quo, blocking any and all efforts led at the national level. Status: Passed Senate; House Criminal Justice & Public Safety OTP 14-10, Awaiting House Vote; Action: Contact State Representatives and urge to oppose

HB 195 would exempt brandishing (displaying) a firearm from the reckless conduct law. Currently, a person is guilty of reckless conduct if they recklessly engage in conduct which places or may place another in danger of serious bodily injury. Reckless conduct is a class B felony if the person uses a deadly weapon, or a misdemeanor for all other reckless conduct. Upon proof that the victim and defendant were intimate partners or family or household members, a conviction under this section is recorded as “reckless conduct-domestic violence.” HB 195 is an attempt to exempt displaying a firearm from the reckless conduct law. This dangerous move gives a free pass to anyone who wishes to recklessly brandish firearms to harass, intimidate, coerce, control, or threaten others—from domestic abusers to armed extremists. Status: Passed House, Senate Public Hearing held May 10th, Awaiting Senate Committee vote; Action: Contact Senate Judiciary Committee and urge to oppose

HB 196, which shares the same sponsors as HB 195, would exempt brandishing a firearm from the criminal threatening law for trespassing. This broadly and poorly written bill would legally allow a domestic abuser to brandish a weapon at a victim; vigilantes to pull a gun on someone they believe should not be on a property regardless of who actually owns or maintains the property in question; and yet others to draw weapons on people peacefully walking down the street in front of their home, canvassing or selling Girl Scout cookies, or lost and looking for directions. Status: Passed House, Senate Public Hearing held May 10th, Awaiting Senate Committee vote; Action: Contact Senate Judiciary Committee and urge to oppose

SB 141-FN would change the procedure for conducting firearm background checks in New Hampshire. Under the federal Brady Act, criminal background checks must be conducted on individuals before a firearm may be purchased from a federally licensed dealer (gun store). In New Hampshire, background checks on handgun purchases are conducted by the NH Department of Safety and background checks on long guns are conducted through the FBI’s National Instant Criminal Background Check System (NICS). The gun lobby is divided on the bill, half believing the state gun line duplicates services and takes too long and others opposed to ceding the line to federal authority. Domestic violence prevention advocates support a state gun line, noting that it picks up things the federal background checks do not. Status: Passed Senate, House Criminal Justice & Public Safety ITL 15-6, House Vote 6/2 or 6/3; Action: Contact State Representatives: support committee recommendation inexpedient to legislate

Stand Your Ground or “Kill at Will” Expansion (HB 197)

New Hampshire already has a so-called “Stand Your Ground” law—giving people a license to kill when confronted with a perceived “threat” without even considering walking away or de-escalating the situation. Now, our legislators are attempting to make this dangerous law even worse with HB 197 which would expand where and when deadly force can be used. Stand Your Ground laws, also known as “kill at will” bills, do nothing more than justify murder. These laws protect white vigilantism and embolden reckless gun owners to shoot first, ask questions later, and claim self-defense to avoid culpability for murder. As millions of Americans demand solutions to violence and racial injustice, these bills double down on the same white vigilantism that led to the murders of Trayvon Martin and Ahmaud Arbery. Everyone has the right to stay alive when walking down the street or jogging in their neighborhood. Stand Your Ground laws move us in the opposite direction. Status: Senate Judiciary Committee recommended re-refer to committee, full Senate vote 5/13; Action: Contact State Senators and urge to support committee recommendation to re-refer

HB 307 would expand New Hampshire’s already-expansive firearm preemption law to prevent any regulation of firearms, ammunition, and knives in municipal, school district, and public college and university buildings and property, including the discharge of firearms on municipal property or on school grounds. The bill would also add new punitive measures to intimidate and punish local communities and school districts that establish or enforce common sense firearms and knives regulations. For example, adopting a policy that prohibits target shooting on a town or school-owned athletic field or in a town cemetery would subject the municipality or school district to financial penalties. School districts that try to prevent parents, teachers, staff, or visitors from bringing firearms and knives into schools would be subject to the same punitive measures – as would any private entity leasing or operating in municipal or school property (after-school organizations, civic groups, etc). The penalties would apply even though the legislative or governing body believed in good faith that it had the authority to enact the regulation, and even if their attorney advised that it was legal to do so. The bill also allows the municipality or school district to be sued in court for $10,000, plus attorney fees, and makes the enactment or enforcement of local public safety regulations grounds for termination of public employees or removal from public office by the Governor. New Hampshire already has a preemption law, which broadly prohibits local municipalities and school districts from enacting common-sense firearms regulations. This bill takes that a step further and intimidates local officials from doing anything regarding guns and knives in our high traffic public spaces or learning environments. Status: Passed House, Senate Public Hearings scheduled for May 10th; Action: Contact Senate Judiciary Committee and urge to oppose

HB 334 would allow someone to carry a loaded firearm on an OHRV or snowmobile. The high risk of accidental discharge due to an accident, bump, or spill is a danger to anyone in the vicinity. Status: Passed House, Senate Public Hearings scheduled for May 10th; Action: Contact Senate Judiciary Committee and urge to oppose

Take Action! We need your help to defeat these dangerous bills! The most important actions we can take right now is to contact our municipal and school leaders (Mayors, Aldermen, Select Boards, City or Town Council Members, School Board Members, Police Chief, Educators, and Students), domestic violence shelters, after-school programs, as well as family and friends and ask them to advocate in opposition to these bills. Next steps and resources:

Get Involved in a Local Gun Violence Prevention Group

There are a lot of powerful gun violence prevention groups. Here are a few of our favorites besides Granite State Progress’ GunSense NH – click on the name to take action and get action updates.

*** Moms Demand Action-NH takes the lead on public education in New Hampshire and we highly encourage you to get involved with them! ***

The Coalition to Stop Gun Violence

The Campaign to Keep Guns Off Campus

NH Gun Violence Prevention Coalition (Statewide Network) | GunSense NH. The statewide coalition for gun violence prevention has worked together for the last 8 years to protect and advance common sense public safety laws. The coalition typically holds a NH GVP Summit each fall that includes message training, state and federal landscape updates, and campaign planning for the coming year. Interested community members and grassroots groups are encouraged to get connected to this state-led efforts and collaboration. To get involved in the statewide coalition, bookmark this page or contact GunSense NH, a project of Granite State Progress at gunsensenh@granitestateprogress.org. Coalition members include both individuals and champion legislators as well as organizations representing advocates, moms, medical professionals, gun owners, law enforcement, educators, students, and faith leaders.

Looking for facts and information about firearms? Our go-to source is the Giffords Law Center to Prevent Gun Violence which provides data and analysis, as well as trends in federal and state legislation. Check out the New Hampshire page. We also recommend Center for American Progress for timely news.

Be SMART for Kids and Mother’s Dream Quilt Project

Be SMART for Kids. Children and unsecured guns are a dangerous, and all too often deadly, mix. Responsible adults–both gun owners and non-gun owners alike–can help prevent tragedies that result when kids get ahold of unsecured guns. The Be SMART program provides five simple steps that we can all take to prevent children from accessing guns.

Mother’s Dream Quilt Project. Every mother dreams of a happy future for her children. Unfortunately, too many American mothers see that dream shattered by gun violence—which has become part of the very fabric of our country. Moms Demand Action has created The Mother’s Dream Quilt Project to symbolize the human toll of gun violence in America, and mothers’ shared dream of a country where all our children will be safe.

Governor Sununu and Senate Republicans spent their time in Concord parroting gun lobby talking points instead of standing up for the safety of students and families. Meanwhile, other elected officials were working hard to advance common sense gun violence prevention measures. Here’s how your State Senators and Representatives voted during the 2017-18 session :

(Select your county to view or print)

To find your legislator, use this look-up tool at the NH General Court:
http://www.gencourt.state.nh.us/house/members/wml.aspx

For an easy-glance page of the vote records for sharing on social media, use:
https://granitestateprogress.org/2018/03/24/how-did-your-state-senator-and-reps-vote-on-gun-violence-prevention/