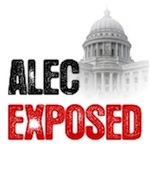 Challenging conservative propaganda is a full-time job. We debunk the latest conservative shenanigans as well as share in-depth reports on groups like the American Legislative Exchange Council (ALEC).

Corporate special interests have been influencing our elections for years, but the corporate corruption of our legislative process is just as dangerous. The American Legislative Exchange Council, otherwise known as ALEC, allows corporate lobbyists to sit side-by-side with state legislators and write legislation that is then introduced in State Houses across the country. This model legislation is not drafted in response to any local interests or community concern; instead it is often intended solely to benefit the bottom line of special corporate interests.

ALEC Exposed is a national campaign by The Center for Media and Democracy and various partner organizations, including the ProgressNow network, to expose ALEC’s operations, lobbying, and model bills.  We work together to identify ALEC model legislation and expose the politicians and special interests who are working behind closed doors to do the most fundamental act of lobbying: writing our state laws.

Since the summer of 2011, Granite State Progress has led ALEC Exposed work in New Hampshire, working closely with allied organizations, legislators, and community activists. The influence of ALEC corporate special interests in the New Hampshire State House is shocking. During the 2011-2012 legislative session, Granite State Progress was able to expose a total of 30 ALEC model bills; 16 of which became law.  Worse yet, as corporations and state legislators across the country dropped ALEC membership, several Granite State legislators instead doubled down on this corporate agenda.

The good news is that our sustained ALEC Exposed NH campaign has lessened ALEC’s influence here over the last 5 years. ALEC has not substantially grown its membership here, and after Granite State Progress started providing press releases and testimony on every ALEC model bill in the State House, we saw a drop in ALEC model legislation being introduced.

Our goal is to educate legislators, the public and media about ALEC and its influence in New Hampshire; build public support to consider legislative or other avenues for exposing and holding accountable ALEC influence in New Hampshire; and discourage new or returning legislators from actively sponsoring ALEC model legislation. Read through our reports below, host an ALEC Exposed presentation in your community, or contact us to volunteer on the ALEC Exposed NH campaign.

Past Reports or Coverage:

Media Matters, The NH Union Leader Just Hired A Disciple Of The Koch Brothers To Run Its Editorial Page, September 2015

(Note: This page is currently being updated. Please check back.)