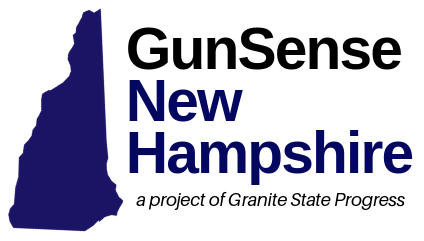 CONCORD, NH – Today the NH House Criminal Justice and Public Safety Committee passed SB 154, amended, on party lines. The bill prevents the State of New Hampshire, a political division of the state or any person acting under the color of state, county, or municipal law from “using any personnel or financial resources to enforce, administer, or cooperate with any law, act, rule, order, or regulation of the United States Government or Executive Order of the President of the United States that is inconsistent with any law of this state regarding the regulation of firearms, ammunition, magazines or the ammunition feeding devices, firearm components, firearms supplies, or knives. Silence in the New Hampshire Revised Statutes Annotated pertaining to a matter regulated by federal law shall be construed as an inconsistency for the purposes of this chapter.”

Statement from Zandra Rice Hawkins, director of GunSense NH, a project of Granite State Progress: “Even when they don’t make the headlines, senseless gun tragedies take lives every day and leave lasting trauma in communities, especially communities of color. We all have the right to be safe in our homes, schools, and communities. The Biden Administration and leaders in Congress are working urgently to save lives, and it is frustrating that Chris Sununu and his Republican majorities in the State House continue to hold New Hampshire back. SB 154 is unconstitutional, could cause New Hampshire to lose hundreds of thousands of dollars in federal grants and aid, and is designed to block, stop, or delay common sense gun violence prevention efforts. We need to close background check loopholes, stop the proliferation of ghost guns, reign in firearms and accessories that contribute to the death toll in mass shootings, and develop a real plan to address the public health pandemic that is gun violence. SB 154 would be worse than the status quo, blocking any and all efforts led at the national level. It could also prevent New Hampshire from working with the DOJ, FBI, or AFT on major issues like the violent insurrection at the capitol or the growing armed militia and white supremacist activity in the Granite State.”

Statement from Tracy Hahn-Burkett, convener of the Gun Violence Prevention Working Group for the Kent Street Coalition: “SB 154 seeks to put gun rights above everything else in the state—including the people’s safety and their right to survive until the end of the day. At a time when shootings come to us on the news almost with the regularity with sports and weather reports, it would remove the people of New Hampshire from any and all protection offered to us by our own federal government. There would be no federal assistance for gun-related crimes; no federal help for investigations into white supremacist groups. This bill goes far beyond allowing law-abiding gun owners to own a firearm, rather it lifts worship of the gun above everything and everyone else in New Hampshire and it should never be allowed to become law.”